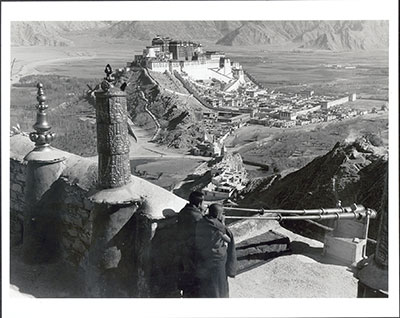 Technical Information - The original image was taken with a quarter plate Zeiss Nixe film or film pack camera as the negative is quarter-plate sized. See Chapman Lhasa The Holy City, London: Chatto & Windus, 1938, p.146 for a description of the still and cine cameras that Chapman used as Mission photographer [MS 25/2/2005]

Other Information - Cultural Background: The trumpets can be reduced in size by pushing them in on themselves like a telescope. Gyaltsen or Victory banners made of brass or copper can be seen in the left of the image symbolizing the victory of Buddhism [TS 7/2/2005]