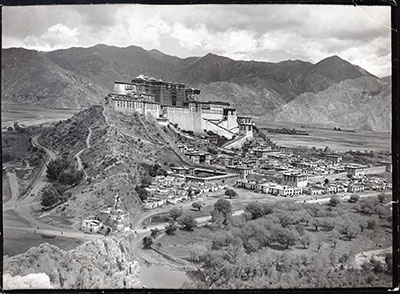 The southern face of the Potala Palace with Sho village beneath it as seen from Chakpori. Pargo Kaling, the Western Gate of Lhasa in the left foreground

Notes on print/mount - The back of the print is extensively marked with crop and reproduction instructions of a similar nature to those found on 1998.131.297. These include pink oval enclosed instructions that say 'To Stanhope - Use this portion only) and 'Z page 18'. The name 'Stanhope' has been written in the bottom right hand corner. There appear to be two levels of cropping marks, possibly reflecting different usages of the image in different performances. There is also a caption, written in pencil on the back of the print, which states 'The Potala, southern face, and the hamlet of Sho, western gate in the foreground'. [MS 4/4/2005]

Other Information - Photographer: This image might not have been taken by Chapman as there is no reference number and Chapman was usually meticulous about cross-referencing his images, especially those intended for publication.

Other Information - Dates: Internal evidence suggests that this may have been taken on the same day as CO.34 (as seen in draft mission album made available by the Gould family for display in the 2003 PRM Temporary exhibition "Seeing Lhasa"). Images in the 'CO' sequence of negatives seem to have been taken on September 16th 1936. This also seems likely from the state of the local flora as seen in this image [MS 18/03/2006]

Other Information - Setting: This photograph was taken from Chakpori hill, where the Medical College was based. Chapman describes the effect of seeing the Potala from this vantage point in his book Lhasa the Holy City [London: Chatto & Windus, 1938; reprint, London: Readers Union Ltd., 1940]: "I have sometimes regretted the presence of the Iron Hill and wished that the Potala rock could stand alone as the only eminence in the vale of Lhasa. But it justifies itself by affording what is to my mind the finest view in all the world. It is from here that the Potala, balanced by the flat-roofed village at its foot, is seen to most advantage. It is sufficiently near for detail to be distinguished, and far enough away to be seen as a whole. From the other view-points it leans back unduly; it is stupendous, awe-inspiring, but not in equilibrium. Seen from the top of the Iron Hill it is as near perfection as anything in this world can be. Buildings in other countries may challenge comparison with the Potala; but to my mind no edifice, so perfect in itself, is placed in such incomparable surroundings" [1940, p.172] [MS 4/4/2005]