Potala palace from the south west 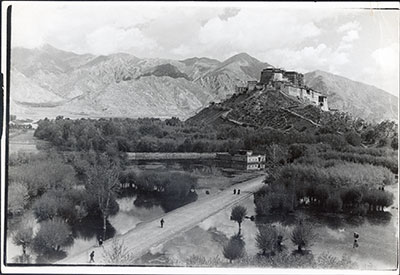 The Potala Palace from the south west. Marshlands behind the Potala appear to be flooded and people can be seen walking along a narrow path. Rain clouds gathering in the sky

Notes on print/mount - The reference number 'C-Q-1' has been written on the back of the print in pencil. This seems to relate to the numbering system that Chapman adopted for images taken during the British Mission to Lhasa in 1936-37. The caption 'Potala from the SW' has been written in pencil, as has the term 'Dupe', which has been encircled, indicating that this is a duplicate image. Significantly also the instruction 'Do not use' has been underlined, apparently relating to the selection of images to be included in the Mission album [MS 2/4/2005]