Chakpori from roof of Potala 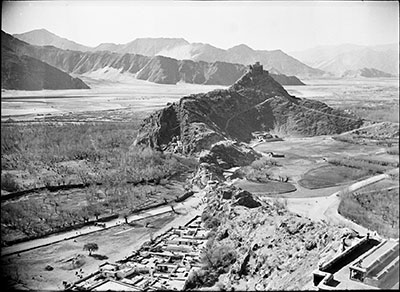 View south west from the roof of the Potala looking towards Chakpori, or Medicine Hill.

Manual Catalogues - Caption in Chapman's hand-written list of negatives made whilst on the Mission to Lhasa, 1936-7 [See PRM Manuscripts Collection]: 'From Potala roof of Hospital Hill [Chakpori] poor' [MS 18/03/2006]

Technical Information - This image was taken with a quarter plate Zeiss Nixe film or film pack camera as the negative is quarter-plate sized. See Chapman Lhasa The Holy City, London: Chatto & Windus, 1938, p.146 for a description of the still and cine cameras that Chapman used as Mission photographer [MS 25/2/2005]

Other Information - Related Images: Images prefixed with 'C.18' comprise a group of negatives containing images of the mission personnel, the Dalai Lamas’ tombs and the Potala. They seem all to have been taken on November 22nd 1936 [MS 18/03/2006]

Other Information - Setting: The Mission party, excluding Basil Gould who was ill, visited both the Potala and the Norbu Lingka on September 6th 1936,and then again on November 22nd 1936 after the arrival of all the Mission members in Lhasa, when it seems that this photograph was taken. In the official Mission Diary Chapman does not describe the panoramic view of the roof very fully, concentrating instead on the tombs of the Dalai Lamas. However, in his publication Lhasa the Holy City [London: Chatto & Windus, 1938; reprint, London: Readers Union Ltd., 1940] he allows himself to engage in a more picturesque description, albeit one that was, typically of Chapman's writings, coloured by his negative reactions to the living conditions of ordinary Tibetans in the full account an extract of which is given below: "After tearing ourselves away from the shrine we climbed a crazy ladder to the roof, which is of sand and gravel beaten to the consistency of concrete. It is here that the Dalai Lama, when in residence at the Potala,, takes exercise. And what a superb place to take a constitutional! The whole vale of Lhasa lies spread out beneath one, surrounded by a cirque of wild mountain scenery. To the south-west the steep ridge of the Potala rock drops to the Western Gate and rises again, yet more steeply, to the crest of the Iron Hill surmounted by the Medical College. Immediately below lies the great square courtyard of the southern entrance with its battlemented walls and massive gate-towers. ... // Everywhere there are trees - lines of giant poplars, groves of pollard willows, and beside the river acres and acres of thorny scrub" [1940, pp. 180-1] [MS 2/4/2005]