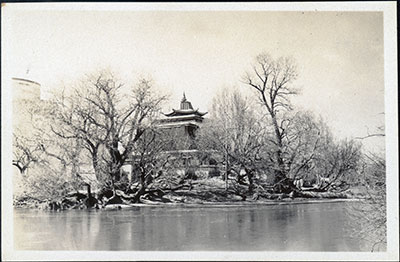 Notes on print/mount - 'F. S. Chapman' has been written on the back of the print. The print is made using Velox paper, which is identified by the tradename in an oval border. [MS 21/2/2005]

Other Information - Description: The Lukhang is believed to have been built by the Sixth Dalai Lama, who is known to have taken great pleasure in the gardens around the temple when he wanted some respite from the more enclosed and sombre setting of the Potala Palace. However, legend also has it that the building was initiated by the Fifth Dalai Lama. In this legend, when the Potala was being built a pit is believed to have opened up and filled with water because the nature spirits of the place were disturbed. The Dalai Lama then promised to build a temple to placate them. The walls of the Temple were covered with many beautiful murals of great religious and artistic quality [MS 21/2/2005]