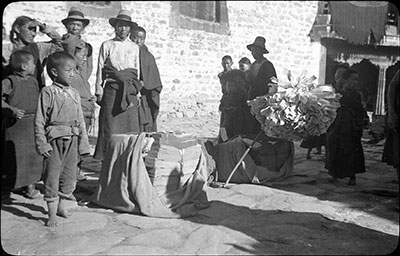 Street in Lhasa near the Barkhor, possibly near one of the entrances to the Jokhang. Religious texts for sale. A crowd of onlookers watch the photographer

Other Information - Photographer: The identification 'YN' in the negative enables this image to be attributed to Evan Yorke Nepean rather than F. Spencer Chapman [MS 16/03/2006]

Other Information - Dates: The date has been suggested by comparing this image with others taken by Chapman, which were clearly taken at the same time, and for which a possible date has been determined [MS 16/03/2006]

Other Information - Cultural Background: Religious texts for sale. Books rectangular in shape. The paper is normally made from the daphne shrub and the texts are block printed. [Marina de Alarcón ZF 1995.1]