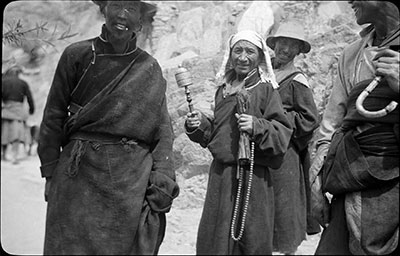 Tibetan people dressed in coats or chuba. Woman in centre holds a prayer wheel and rosary. Woman in centre is wearing a distinctive style of headdress; man on right is carrying an umbrella. Could be on the lingkor pilgrimage route because of the religious carvings on the rockface above

Other Information - Photographer: The inscription 'YN' in the negative seems to relate to Evan Yorke Nepean, who was part of the Mission to Lhasa in 1936-7 and who took many photographs alongside Chapman. For this reason the image has been reattributed as having been taken by Nepean. Nepean arrived in Lhasa on September 6th 1936 and left on December 14th 1936 and so this image must have been taken during that time if taken by him [MS 18/2/2005]

Other Information - Dates: This image has been dated by relating it to similar images taken by Chapman [MS 16/03/2006]

Other Information - Description: Chapman wrote a description of the sights he encountered whilst making a circuit of the Lingkhor around Lhasa and the Potala in his publication Lhasa the Holy City [London: Chatto & Windus, 1938; reprint, London: Readers Union Ltd., 1940, pp. 160-70]