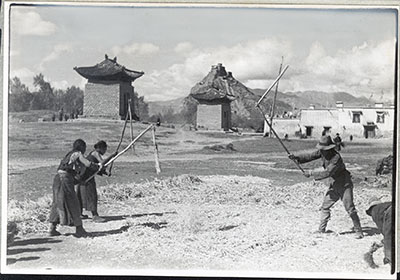 Notes on print/mount - The back of the print is covered with many crop and reproduction marks. These include the instructions to crop 1/2" from the left hand side and to reduce the width to 5 5/8". A number of reference numbers have been written on the back of the print in pencil. These include '29a' in the top left hand corner, and the reference 'C-W-18'. This latter number seems to relate to the numbering system that Chapman adopted for images taken whilst on the British Mission to Lhasa in 1936-7. A piece of tracing paper has been attached to the back of the print and folded over the front. This would have been used to transfer reproduction information to the front. However, this has not been used and the image was not included as an illustration of the official diary [MS 1/4/2005]

Other Information - Related Images: Images prefixed with 'CW' comprise a group of negatives containing images of the Regent’s camp, young monk with kite, flailing corn, yaks coming down street, Pargo Kaling, yaks with loads, Kundeling. This list has been identified with the letter ‘W’ rather than CW, unlike most other lists in the archive, but relates to images prefixed with ‘CW’ in the draft album. The list has been written in black ink, unlike the others which are written almost entirely in pencil. All the images seem to have been taken on or around October 6th and many are used to illustrate early October in the Mission Diary [MS 16/03/2006]

Other Information - Setting: This photograph was likely to have been taken just south of Sho. Chapman describes the two Chinese style buildings in his book Lhasa the Holy City [London: Chatto & Windus 1938; reprint, London: Readers Union Ltd., 1940]: "Just beyond Sho there are two small pagodas on the left of the road; these shelter stone inscriptions recording Chinese victories" [1940, pp.149-50]