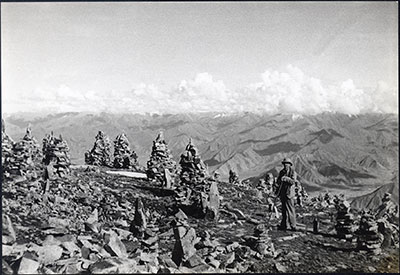 Hugh Richardson at the summit of Gyamberi, the mountain overlooking Drepung Monastery. Also known as Mount Gephelri, Gephelutse or Gyemphel Utsi. Image shows Richardson standing on the mountain top with a vast panorama of mountains in the far distance. Summit covered with cairns left by pilgrims over many years, even centuries. It Is One Of The Most Sacred Mountains In The Lhasa area. Many Ceremonies in Lhasa take their starting point as the time When The Sun Lights Up The Summit. An Important Ceremony Of Juniper Offerings Is Held Here And An Auspicious Celebration For The Buddha's birthday. Chapman calls Gyemphel Utsi 'Holy Hill'.

Manual Catalogues - Caption in Chapman's hand-written list of negatives made whilst on the Mission to Lhasa, 1936-7 [See PRM Manuscripts Collection]: 'Ditto ditto [Cairns on summit of Holy Hill [Gyamberi] ] and HER [Hugh Richardson]'; PRM Manuscripts Collection: ‘List of Tibetan Prints and Negatives’ - Book 1, From Gangtok to the Natu La August 1936: ‘35/2 - Cairns of rock on summit of Holy Hill near Lhasa’ [MS 16/03/2006]

Contemporary Publication - Chapman used this image to illustrate the entry in the official Mission Diary for September 27th 1936. The text that this photograph illustrates is as follows:"As far as possible, Sunday is kept as a holiday. Morgan, Chapman, Nepean and Richardson climbed of [ sic ] 17,450 ft overlooking Drepung Monastery. It is a very holy place called Gyenbay Ri. A kind of 'via sacra' marked out with stones leads along a steep ridge to the summit which is covered with cairns and prayer flags. We were told that the Dalai Lama and every monk must climb the hill on certain occasions. Those who are too old for much effort go up on yaks. Only the yaks belonging to the Dalai Lama are allowed to graze on so sacred a mountain".

Other Information - Description: Chapman describes the visit to this mountain top in his populist publication Lhasa the Holy City [London: Chatto & Windus, 1938; reprint, London: Readers Union Ltd., 1940]. In this account he gives additional information about the flora of the region, in which he was greatly interested. He stated: "Only the Dalai's yaks may graze on this mountain, and only his doctors may collect herbs here. It was certainly an excellent place for plants. I found a small patch of a rare blue gentian with hairy leaves ( Gentiana amphicratea ), also several unusual aconites, a rare swertia, and other plants which I found in no other locality near Lhasa. A remarkable Via Sacra , bordered by lines of stones and cairns, led along the last mile of the grassy ridge to the summit, which was covered with literally hundreds of cairns, many of them eight or ten feet high. From here we could see far down the valley of the Kyi Chu, and it was noticeable that this valley is quite level right up to the very foot of the spurs which rise, one after another, so precipitously from its sides. Several snowy peaks were visible in the extreme distance, but we could not identify them" [1940, pp. 259-60] [MS 26/3/2005]

Biographical Information - Hugh Richardson dedicated much of his career to diplomacy and scholarship in Tibet and spent a total of eight years in the country (1936-1940 and 1947-1950). In 1936 he was British Trade Agent in Gyantse and then joined the Lhasa Mission serving under Gould. In 1937 he remained in Lhasa when the rest of the Mission left. He is said to have spoken “impeccable Lhasa Tibetan with a slight Oxford accent” (Shakabpa 2001). In 1944 he was awarded the OBE for his work for the Indian Civil Service but in 1950 he began a second career as a scholar writing many books on aspects of Tibetan history and culture. When he died in Scotland in 2000, butter lamps were lit in the Jokhang in Lhasa in his honour. [CH 2003]

Other Information - Cultural Background: People go to the top of the peak at occasions such as New Year and burn dried juniper offerings to purify the environment and on the 4th day of the 6th Tibetan month there is a festival at which all the young people and camp for the night on the mountain: becomes a forum for a festival. This gathering is often used as marker in Tibetan folk songs connected with lovers' trysts etc. [TS 31/1/2005]