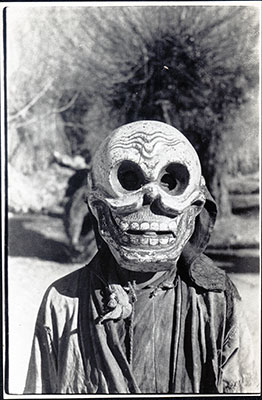 Lhasa mummer in skull mask, close-up, performing in the grounds of the British Mission residency in the Dekyi Lingka. This mask represents the Guardian of the Cemetery figure who appears frequently in Tibetan drama. Although Chapman refers to these masks as being made of papier mache they are more likely to have been carved from hardwood. Chapman also refers to the mummers as being very poor and this is possibly evidenced from the small portion of dress visible in this image

Notes on print/mount - The print is a copy or facsimile that has been made to prepare the image for reproduction. The back of the print has some markings that could have been used as crop lines, similar to the many others of this kind in the Chapman collection. However, the instruction 'Not to be used' has also be written prominently across the back in pencil. Other annotations of interest on the back of the print are '30b' in pencil in the top left hand corner and 'B-B-13' written in pencil across the middle. This seems to relate to the numbering system adopted by Chapman for images taken during the Mission to Lhasa in 1936-7 under Sir Basil Gould [MS 15/2/2005]

Other Information - Cultural Background: Masks represent characters from religious plays - often depicting the defeat of Hinduism by Buddhism. This mask represents the Guardian of the Cemetery ie: where the body will be dismembered. This figure may occur frequently in Tibetan drama [TS 31/1/2005]

Other Information - Cultural Background: Although Chapman refers to these masks as having been made of papier mache, they are more likely to have been carved out of hardwood or made of cloth layered in a clay mould hardened with glue. They would not usually be made of paper because paper was very rare and expensive. These appear to have been made of carved wood [TS 31/1/2005]