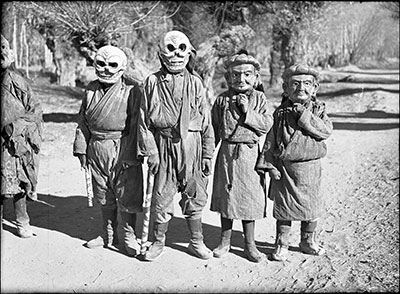 Group of Lhasa mummers, all masked, who came to the Dekyi Lingka to perform, where the British Mission under Sir Basil Gould was staying

Other Information - Cultural Background: Although Chapman describes these masks as being made of paper, they are more likely to have been carved out of hardwood or made of cloth layered in a clay mould hardened with glue. They wouldn't usually be made of paper because paper was very rare and expensive. These appear to be made of carved wood [TS 31/1/2005]