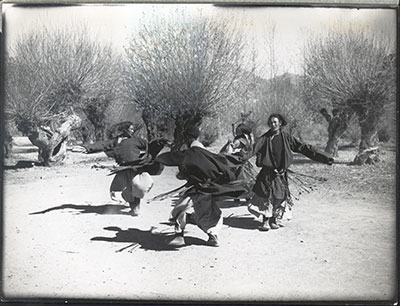 Group of four Khampa dancers. These dancers are likely to be performing by invitation in the grounds of the British Mission residence in the Dekyi Lingka. Three men and a woman are dancing in a circle with their right arms leading into the centre of the ring, their left arms projecting outwards although they also appear to be moving in different directions. They are wearing loose fitting coats and wide bottomed, baggy trousers. They have long tasselled belts hanging from their waists. Their clothing is flowing widely around them as they dance. There are trees in the background and the dancers perform in an area of smooth, hard earth

Notes on print/mount - The central tree in the background of the image has been retouched using a fine grey or light brown pen/pencil and a white pen. The markings are intended to give more definition to the branches of the tree. A piece of tracing paper has been stuck to the back of the print and then folded over. This would have been used to transfer cropping and other instructions from the back to the front. The caption 'Kampa Dancers' has been written on this paper in pencil, and the letter 'F' has been written in red crayon. There are other markings relating to the intended size of a further reproduction of the image. The back of the print is covered in instructions on how to reproduce the image. These include crop and resizing instructions as well as ' "Lhasa" - transferable? Kampa Dancers [encircled]'. Other significant annotations include the number '30d' in pencil in the top left hand corner under the tracing paper, 'C/12/12' written in pencil across the centre. This relates to the numbering system that Chapman used for images taken on the British Mission to Lhasa in 1936-7. '8-4 3/4' written in red crayon down the right hand side of the back of the print [MS 15/2/2005]

Other Information - Cultural Background: The trouser style is the same as for people referred to as Bathang , who come from the south eastern part of Kham. They would come to Lhasa possibly on pilgrimage and would perform to raise money. The tassels on the men's dress are used to enhance the dramatic effect of their acrobatic dances; for the same reason the trousers are very baggy to exaggerate the shapes and movement of the dance [TS 31/1/2005]