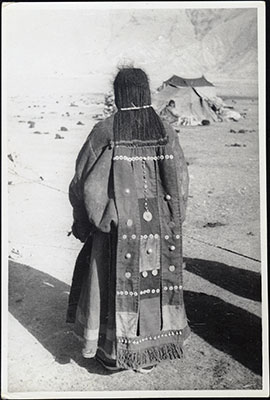 Notes on print/mount - 'BJ 33' has been written on the back of the print in pencil. This relates to the numbering system that Chapman adopted for the images that he took whilst working as official photographer and Secretary to the British Mission to Lhasa in 1936-37 under Sir Basil Gould. [MS 10/2/2005]

Other Information - Description: Chapman wrote a further, fuller description of the dress and hair style of this particular woman in his publication Lhasa the Holy City [London: Chatto & Windus 1938; reprint, London: Readers Union Ltd., 1940]. He wrote: "Another head-dress [for prior reference see 1998.131.248 & 1998.131.249] was even more remarkable: the woman's hair was again tied into tiny plaits and these were sewn on to a long strip of cloth woven in green and scarlet squares that reaches almost to the ground. These squares were ornamented with Chinese dollars, Indian rupees, pieces of coral and turquoise, rows of cowrie shells and carved ivory; and in the centre was a beautifully embossed disc of silver. I wondered how often she washed her hair! Some women wear two lumps of amber as big as plums on top of their heads, and usually a few turquoises or corals between. Sometimes strips pf black, green, or scarlet cloth are sewn on to the border and sleeves of the sheep-skin garment. This is very effective" [1940, p.159] [MS 26/3/2005]

Other Information - Cultural Background: Generally Horpa women would have their hair in 108 plaits to reflect the 108 volumes of the Tripitika. The warp threads of the textile extensions would be woven into the hair. The extensions are very heavy because they are made of wool. On the back they would have a string made of precious stones with a round copper or brass charm, often referred to in Tibetan as melong or 'mirror' which is intended to ward of malevolent spirits; this has to be very clear and shiny. Previously they used to use cowrie shells but in this image they appear to be buttons made of conch shells; could also use rupees. The bottom row appears to be made of bells. The colours on the extensions would be natural dyes - often red/maroon, blue and yellow [TS 31/1/2005]