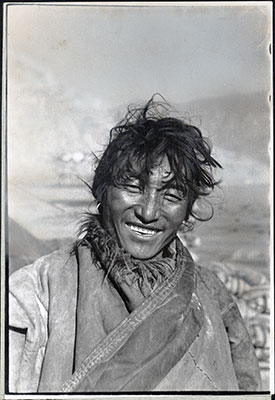 Close up of a nomad headman wearing a sheepskin chuba or coat. Striped woollen textile bags can be seen out of focus in the background on the right, and the edge of a yak's wool tent on the left. The man is wearing two earrings, a hoop in in his right ear and possibly a stud-like earring in the left.

Notes on print/mount - The back of the print is covered in cropping and other instructions including "Cut as shown and reduce to 3 7/16 across the fit plate 36a as shown on accompanying layout". The caption "Nomad headman - bandit in spare time" has been written in pencil, as has 'B.J. 31' across the middle of the print. This relates to the official numbering system that Chapman adopted for images taken during the British Mission to Lhasa in 1936-37. '8-3 5/16' has been written in the top right hand corner, on top of the tracing paper, in red crayon. Underneath the tracing paper the figure '36a' can be seen. A thin piece of tracing paper has been attached to the back of the print for transferring cropping marks. The letter 'N' has been written on this in red crayon and the caption 'A NOMAD HEADMAN - A BANDIT IN HIS SPARE TIME' has been added in a different hand to that which has written the same caption on the back. Other markings include size and crop referents [MS 10/2/2005]

Contemporary Publication - Chapman used this image in the official Mission Diary for the 1936-37 Mission to Lhasa led by Sir Basil Gould to illustrate the entry for January 7th 1937. On this day Chapman rose early to go to the outskirts of Lhasa to photograph some of the nomad camps, which had come to Lhasa to pay taxes and participte in the New Year festivities. The text accompanying this image reads: "Chapman went out in the early morning to photograph a party of nomads who have recently arrived at Lhasa. These swarthy, uncouth-looking men, dressed in a single sheep-skin garment, are much larger and more healthy looking than are the inhabitants of Lhasa. they have a reputation similar to that of the Pathan: if they make friends they will do anything for you, but if roused they are quick to use their knives. ... // Their dialect differs very noticably from that of Lhasa, indeed our Tibetan clerks can hardly understand them. They were vastly amused at being photographed, and showed none of the reluctance which characterises the attitude of most of the Lhasa people to the camera". Later Chapman futher describes the dress of the nomads he visited: "Most of the travellers are nomads from the Chang Thang or the Hor and Kham provinces. They wear a single volminous garment of sheep-skin hitched up with a girdle to facilitate walking. Unlike the inhabitants of Lhasa these men have their hair fairly short - that is to say in a tousled black mop - and they usually go hatless" [Lhasa Misison 1936, Diary Part XIII, January 15th to 31st] [MS 24/3/2005]

Other Information - Related Images: This appears to be the same man as in 1998.131.244.1/.2. This link also suggests that the bags in the background contain salt as this is the commodity being packed in the other images. Images 1998.131.244.1/2 - 1998.131.249 all appear to have been taken with the same group of people on the same occasion, probably on January 7th 1937 as on this date in the official Mission Diary Chapman describes getting up early to travel to the outskirts of Lhasa to photograph nomads who had come to the city for the New Year festivities and to pay their taxes [MS 10/2/2005]

Other Information - Cultural Background: It is very common for nomads to go on raiding trips against farmers and merchants caravans. They would usually prefer to avoid attacking farmers to avoid too much tension with the settled community [TS 31/1/2005]