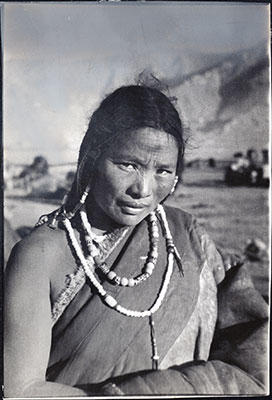 A nomad or Horpa woman from Chang Tang wearing a sheepskin coat or chuba and necklaces made of coral and glass beads. Her right arm has been taken out of the sleeve of her chuba revealing her bare shoulder. There is a dzi stone in the shorter necklace. Dzi refers to a bead that appears to have an etched design of circles and straight lines with either a white, black or natural stone background. The origin and technique of manufacture of such stones is unclear. The woman's head and shoulders are framed against a background which is out of focus. The beads that can be seen in her hair at the front would have been braided into her long, plaited hair in the style typically seen of Horpa women

Notes on print/mount - The back of the print is covered with crop and proof marks and instructions on how to reproduce the image. Included amongst these are the instructions to "Square up carefully" and "Cut as shown and reduce to 3 [inches] across to fit plate 36b on accompanying layout". There are also a variety of referencing annotations such as 'B.I.15' written twice in pencil in the middle of the back of the print, and '36b' in the top left corner. The caption 'Nomad Woman' has also been added in the centre right of the print back. Many of these various annotations seem to have been added by different people and at different times. There is evidence of a piece of thin paper being stuck to the top of the back of the print, which would have been used to transfer the crop markings to the front. There is also evidence of a red crayon being used to mark up or number the image in some way, as is seen on many of these images in the Chapman Collection that were edited for reproduction [MS 3/2/2005]

Other Information - Related Images: Images prefixed with 'BI.' comprise a group of negatives containing images of the Lord Chamberlain, the Rumba family, Khampa people, Mongolian women, Lhasa, Iamtso, Lalu Se and Lalu Monastery. They all appear to have been taken on or around January 7th 1937 [MS 16/03/2006]

Contemporary Publication - This image seems to have been used to illustrate a description of nomad women in text of the official Mission Diary for January 7th 1937. In the 'Appendix to Diary Part XII - Explanatory List of Photographs with Lhasa Mission' he captions this image 'Nomad woman from the Chang Tang'. On this day Chapman went out to the outskirts of Lhasa early in the morning, at dawn, to photograph some of the nomads who had arrived in the city to trade, pay taxes in kind at the Potala and go on the pilgrimage routes around the city. The text which this illustration is intended to support is as follows: "The women, who are remarkably handsome, wear their hair in innumerable minute plaits which are attached at shoulder level to a multi-coloured piece of canvas which hangs down almost to the ground". In his publication Lhasa the Holy City [London: Chatto & Windus, 1938; reprint, London: Readers Union Ltd., 1940, pp. 158-160] he gives a fuller description of the activities of the nomads upon arrival in the city, as well as a fuller description of the style of women's dress that this image seems to have been intended to illustrate: "The women wear a long full robe of sheepskin with the fur on the inside. Often one arm and shoulder is slipped out of the garment, and it is then clear that nothing is worn beneath" [1940, 1938, p.159] [MS 18/3/2005]

Other Information - Cultural Background: True dzi stones are a type of fossil considered to be auspicious. The more eyes the stone has the more auspicious it is supposed to be. As Well As Herding, These People Carried Salt From The North To Trade In The South . [Marina de Alarcón ZF 1995.1]