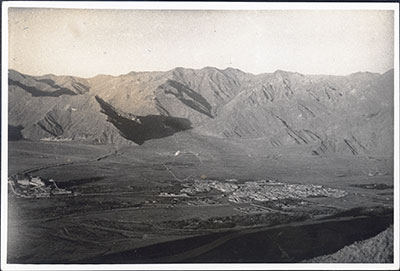 A distant view of Lhasa taken from an elevated position on a nearby mountainside. The Potala can be seen on the extreme left of the image whilst Lhasa town dominates the centre of the frame. Trapshi can be seen in the centre distance and Karma Kasang on the right. The mountains surrounding Lhasa can be seen rising steeply from the valley floor in the distance. Wooded parks and public spaces can be seen in a number of places on the outskirts of the town. The white mark in the centre of the image seems to be from a scratch or mark on the negative or print from which this print was made as a copy

Manual Catalogues - Caption in Chapman's hand-written list of negatives made whilst on the Mission to Lhasa, 1936-7 [See PRM Manuscripts Collection]: 'Distant of L. [Lhasa] city' [MS 16/03/2006]

Other Information - Dates: This photograph was probably taken in January 1937 as the other photographs prefixed with 'B.I' seem to have been taken during this time and the sequence of these images suggests that this image may have been taken on or around January 7th when Chapman travelled outside Lhasa to take images of nomads and seems to have ventured into the hills with his syce Iamtso [see 1998.131.188.1&2] [MS 16/03/2006]