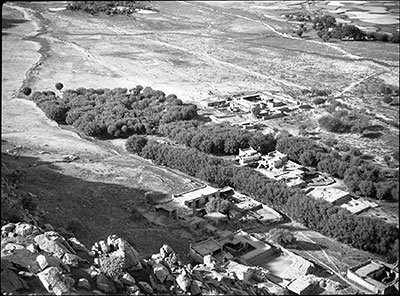 View of a Chushul taken from the nearby fort or dzong. Three domestic compounds are visible in the image. The compound in the centre of the image has a courtyard containing horses. Cultivated and uncultivated land can be seen in the background with paths and dry water channels

In Negative - The number '6' is printed on the negative on the left hand side. This correlates with image C.11.6 in the handlist of images taken whilst on the British Mission to Lhasa in 1936-37. These all contain images taken in the environs of Chushul. The negative is also slightly torn/damaged in the middle of the left hand side. This is typical of many of Chapman's negatives of this size [MS 2/2/2005]

Manual Catalogues - Caption in Chapman's hand-written list of negatives made whilst on the Mission to Lhasa, 1936-7 [See PRM Manuscripts Collection]: 'From Chusul dzong and valley' [MS 13/03/2006]

Other Information - Setting: The centre compound is housing animals and many horses can be seen outside. Each compound or gora includes a courtyard and each one in this image seems to have its own threshing ground, although the cultivated fields appear to be some distance away. [TS 21/1/2005]

Other Information - Dates: This image was probably taken on August 22nd 1936 as it is possible to identify this image in the collection as being of a village in the Chushul region from the handlist of images taken on the Mission in the PRM Manuscript archive. On that date the Mission, en route to Lhasa, travelled from Chushul. [MS 17/3/2005]