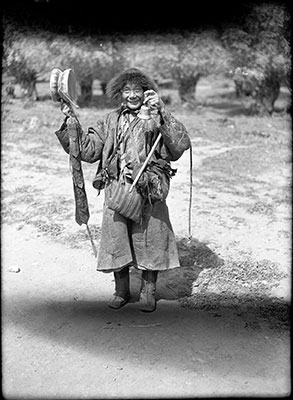 Itinerant monk with bell and skull drum and eye shade of black hair. Full length portrait but with a heavy shadow cast across the bottom of the image. Man wearing sheepskin chuba and with a skull drum and silver bell. Also holding a textile banner in his right hand. Appears to have a wooden sling container suspended over his back

Manual Catalogues - Caption in Chapman's hand-written list of negatives made whilst on the Mission to Lhasa, 1936-7 [See PRM Manuscripts Collection]: 'Beggar with bell and skull drum' [MS 13/03/2006]

Other Information - Related Images: Same person as in 1998.131.203. Images prefixed with 'C.4.' seem all to have been taken during September and early October 1936 and comprise a group of negatives containing images of soldiers, turning prayer wheel, horns and rock paintings, paintings, Dr Morgan and mission hospital, beggar with skull and drum, monks outside Sera, a meat seller, and water tanks. See also 2001.35.182.1 of this same person in the same pose in the Evan Nepean collection in the PRM [MS 13/03/2006]