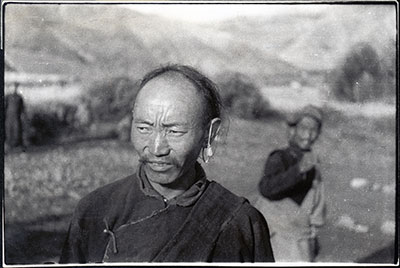 Portrait of a Tibetan man described as both a 'mule driver' and a 'headman' by Chapman, wearing a distinctive ear ornament, which is worn on a loop around the ear because of its weight. The man is in focus in the centre of the image with the background out of focus. Another man can be seen on the right hand side and another person on the extreme left

Other Information - Related Images: Images prefixed with 'CP.' seem all to have been taken on or around the 21st August 1936 and comprise a group of negatives containing images of the route to Lhasa including rock paintings, a ‘ghost scarer’, environs of Nyapsu La, Singma, boats on the Tsangpo, birds and flowers. The list is referred to as ‘P’ in Chapman’s papers, but all the images were prefixed ‘CP’ in the draft album and related prints in the Pitt Rivers Museum collection are also annotated as ‘CP’ [MS 12/03/2006]

Other Information - The ear ornament is worn around the ear on a string because it is too heavy to wear suspended from a hole in the ear. The earring or Along is made of gold with a large piece of turquoise in the centre [TS 20/1/2005]

Other Information - Dress: Chapman comments on the earrings worn by non-aristocratic Tibetan men in Lhasa The Holy City [London: Chatto & Windus, 1938; ; reprint, London: Readers Union Ltd., 1940]. Writing of the attire of the muleteers who accompanied the Mission to Lhasa, Chapman stated: "The better dressed ones wore a large single ear-ring in the left ear and a plain piece of turquoise in the other. This ear-ring took the form of a fluted gold ring about two inches in diameter, with a turquoise mounted in the front. As this ring is very heavy, it is supported by a loop of red cotton over the top of the ear" [1940, p.13] [MS 12/3/2005]