Headmen with gifts for Mission party 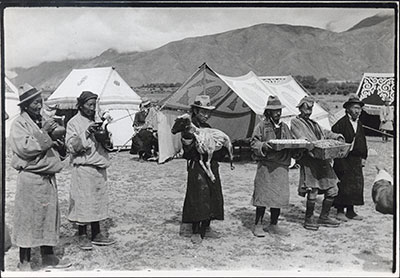 Village headmen bringing gifts to the British Mission party close to. From left to right: tea, a dried sheep, a box of eggs, a box of dried apricots. The group making the offering consists of six men, each carrying a gift with a man holding a dried sheep in the centre. Many Tibetan-style appliqué tents can be seen in the background, as well as other men and a woman who are involved in their own activities. The arm of a man can be seen entering the frame on the right hand side.

Notes on print/mount - The back of the print is covered with crop and proofing marks. Included amongst these are the instruction to crop the image by 1/2" on the right hand side. This would crop the arm projecting into the image from the frame and the onlooker standing in the background in front of the tent. It also has the reference number 'CH.A.18' written across the back of the print in pencil. This relates to the numbering system Chapman adopted during his time as Secretary and principal photographer on the Basil Gould Mission to Lhasa. This enables the image to be dated to August 22nd 1936 as this image was used to illustrate that day's events in the official Mission Diary [MS 17/1/2005]

Manual Catalogues - Caption in Chapman's hand-written list of negatives made whilst on the Mission to Lhasa, 1936-7 [See PRM Manuscripts Collection]: 'Proffering gifts'; PRM Manuscripts Collection: ‘List of Tibetan Prints and Negatives’ - Book 1, From Gangtok to the Natu La August 1936: ‘25/4 - On the far side of the Tsang-po local headmen gave us tea in applique tents. We were given presents of grain, eggs (very ancient), dried carcasses of sheep and (on left) pots of Tibetan tea’ [MS 12/03/2006]

Other Information - Related Images: Images prefixed with 'CHA.' seem to have been taken mainly in and around Chushul on August 22nd 1936 and comprise a group of negatives containing images of yak hide boats and horses on and in the Tsangpo river, gifts being offered, Mission and Tibetan officials, scenes along the banks of the river and near Chusul and a ‘monastery village’ near Chusul. The collection of images have been given the heading ‘Army and Navy Prints’ at the top of Chapman’s hand-written list. This probably refers to the company that made the prints as there are four negative and print cases made by the Army & Navy Co-operative Society Limited, Bombay in the Pitt Rivers Museum archive. Alongside other notes on the inside of the cases are the annotations ‘L Set’, ‘J Set’, ‘Set H’ and all have been ascribed to the name of ‘The Political Officer Sikkim’. [MS 12/03/2006]

Other Information - Description: Philip Neame wrote in the Mission Diary for August 22nd 1936: "On the far bank [after crossing the Tsangpo river at Chusul] we were entertained by the local headmen to "chang" and Tibetan tea in gaily ornamented tents while the ponies were resaddled. Presents of a whole sheep, the body skinned but with head unskinned and looking still almost alive, eggs and very small peaches [ sic ] were received, we then rode some 15 miles down the Tsangpo valley, extremely fertile, well irrigated and with villages surrounded by a variety of trees in addition to the usual willow and poplar". Chapman also briefly describes receiving these visitors and their gifts in his published work Lhasa The Holy City [London: Chatto & Windus, 1938; reprint, London: Readers Union Ltd., 1940]. This account is significantly more condescending towards the Tibetan headmen and displays the shift in tone that Chapman often employed when addressing a popular rather than official audience. He wrote: "On the far bank a Tibetan appliqué worked tent had been put up, and we were given chang and Tibetan tea by the local headmen. Then a procession of wild-looking yet obsequious ruffians appeared with the usual presents: dried carcass of sheep, eggs, and grain [ sic ]. We had a grand gallop over the sandy plain, where there are many prayer-walls and chortens" [1940, p.65] [MS 12/3/2005]