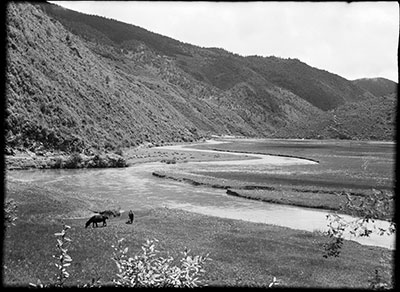 Lingmathang is situated in the Chumbi Valley close to Gautsa. A horse can be seen grazing by the Kyichu river with a person standing close by. The river can be seen zig-zagging along the valley with hills on its left and a flat plain on its right. Some foliage can be seen in the lower foreground

In Negative - There is a tear on the right hand side of the negative. This seems to occur with many of the negatives of this particular type. The number '2' has been printed on the negative on the left hand side. This refers to the box of negatives labelled 'C.10' in the handlist of images taken on the mission to Lhasa [see PRM Manuscript archive] [MS 14/01/2005]

Technical Information - This image was probably taken with a quarter plate Zeiss Nixe film or film pack camera as the negative is quarter-plate sized. See Chapman Lhasa The Holy City [London: Chatto & Windus, 1938] for a description of the still and cine cameras that Chapman used as offical photographer on the British Mission to Lhasa under Sir Basil Gould 1936-37 [MS 25/2/2005]

Manual Catalogues - Caption in Chapman's hand-written list of negatives made whilst on the Mission to Lhasa, 1936-7 [See PRM Manuscripts Collection]: 'Lingmatan and horses' [MS 12/03/2006]

Other Information - Related Images: Images prefixed with 'C.10.' comprise a group of negatives containing images of Lingmathang, Phari Dzong, Chomolhari from Tuna and a chorten at Chushul. A note at the bottom of the page states that the contact prints for these images were all ‘in album’. They seem all to have been taken in early August 1936 en route to Lhasa [MS 12/03/2006]

Other Information - Description: Brigadier Neame described the Lingmathang plain in the official diary of the British Mission to Lhasa 1936-37 on 4th August 1936: "After an hour and a half's march alongside a raging cataract of a stream and up a gorge bounded by precipitous jungle and scrub covered hills rising to bare rock peaks, we passed a spur nearly blocking the valley and came to the remarkable plain of Lingma Thang, a couple of miles long and half a mile broad absolutely level where the stream meandered gently, having the aspect of a perfect dry fly trout stream. But alas only small local snow trout live here, and they would not look at Gould's fly" [Sir Basil Gould, head of the Mission and Political Officer in Sikkim attempted to fish at this point]. [MS 12/8/2005]