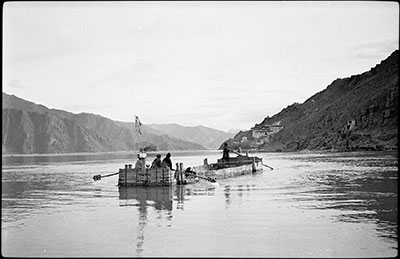 Chaksam winter ferry crossing the Tsangpo river. A rectangular wooden barge can be seen with a carved horse's head and prayer flag on the front. This kind of ferry could only be used during the winter months when the river was relatively low. At other times, hide coracles would be used at Nyapso La, further upriver. The ferry is propelled by oarsmen using wooden paddles. Chushul monastery can be seen in the background on the centre right with a religious structure called a chorten visible just below the monastery. A smaller building on the hillside can be seen on the right hand side. Other structures, including a hermitage, can be seen along the ridge of the mountain behind the monastery. The famous Chaksam (Iron) bridge is faintly visible across the river in the far distance. The ferry has five people inside, none of which are fare-paying passengers. Five people were responsible for working the boat: three or four oarsmen at the end and one man to steer. The fifth man seated in the centre of the boat may have been an oarsman.

Other Information - Dates: In the official Diary of the British Mission to Lhasa for December 23rd 1936 Chapman describes how it had been impossible to use the box-boat ferry across the Tsangpo on their journey towards Lhasa in the summer because the river had been so flooded. This image, therefore, was taken in the period December 14th 1936 to January 2nd 1937. The earlier date relates to the time when Chapman escorted the wireless officer Evan Yorke Nepean as far as Nakartse, as Nepean had to return to Peshawar to take up official duties. Chapman remained in the area for a few days waiting for the arrival of Major Finch, the newly installed Commander of the Escort at Gyantse who visited the Mission over the Christmas period. Finch returned to Gyantse on January 2nd 1937. The precise date depends upon the identity of the photographer [see below] [MS 7/3/2005]

Other Information - Photographer: It is possible that this image was taken not by Chapman but by another photographer, possibly Major Finch, who was made the new Commander of the Gyantse escort in November 1936. The number 'F.24' does not correspond with the photographic reference in the official Mission Diary, for which F.24 illustrates the day of August 24th and the entry of the mission into Lhasa. However, in the list of images in Chapman's hand-written lists in the Pitt Rivers Museum archive, there is an additional sequence of F-referenced negatives, amongst which this image can be identified. 'F' in this case, therefore, may refer to Major Finch, as the sequence of images suggests a very brief stay in Lhasa around the New Year period, followed by a return to Gyantse. In this case, according to the order of images taken, this image would have been taken on the return journey, which commenced on January 2nd 1937. Chapman asked other members of the Mission to use his additional cameras at times, and/or acquired images from them that they took for themselves to include in the Mission collection. It was his habit to identify Nepean's images by inscribing the negative with 'YN' and this may explain the use of 'F' scratched into the negative in this case [MS 7/3/2005]