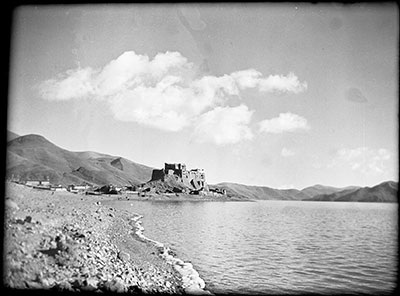 Pede Fort or Dzong, on the shores of the sacred Yamdrok Lake, also known as the Turquoise Lake. The photograph has been taken from the east. The settlement of Pede is visible next to the fort and low hills can be seen in the background. Chapman felt that a substantial decrease in population was visible in this area in 1936, evidenced by ruined, deserted houses and abandoned fields

Manual Catalogues - Caption in Chapman's hand-written list of negatives made whilst on the Mission to Lhasa, 1936-7 [See PRM Manuscripts Collection]: 'Ditto ditto [Pede Dzong from E.] from further away' [MS 12/03/2006]

Other Information - Related Images: Images prefixed with 'C.19' relate to a group of negatives containing images of Pede and Nangartse, Yamdrok Tso, Karo la. The group has been headed ‘Pede and Nangartse’ by Chapman in his handlist of photographs [MS 12/03/2006]

Other Information - Setting: In Lhasa the Holy City [London: Chatto & Windus, 1938; reprint, London: Readers Union Ltd., 1940, pp.61-62] Chapman wrote a description of the setting of this image for August 20th 1936: "All day we rode along beside the lake. I kept a rough check of the pack-animals going south: about 1250 passed us today, of which nearly half were yaks. ... Very often grassy flats lay between the track and the lake, and we could cut across. ... Soon we saw Pede Dzong at the far end of a point running out into the lake. It is just like an old Scottish castle. Unlike Nangartse Dzong it is now ruined. The village lies behind. In the valley nearby barley and peas grow very well in spite of the height. We finished our ride in pouring rain and camped on a flooded field beyond the dzong. There are prayer-flags even here in the water, tied to bamboo poles which are stuck into the bottom of the lake. Spent two hours doing Tibetan, and stayed up till eleven pressing flowers" [MS 7/3/2005]

Other Information - Dates: The date 20th August 1936 has been attributed to this image because the official Mission Diary records that it was on this date that the Mission caravan travelled around Yamdrok Tso to Pede Dzong. However, the photograph may alternatively have been taken during the period 14th - 23rd December when Chapman went on a trip to Yamdrok Tso. He accompanied Evan Nepean, who was returning to Peshawar to resume his military duties, as far as Nagartse. Chapman spent four days around Yamdrok Tso photographing birdlife and flora whilst waiting for the arrival of the new commander of the Gyantse Escort, Major Finch, who then travelled with Chapman to Lhasa to spend Christmas with the Mission. Nonetheless, the gathering of rain clouds in the distance, seen more clearly by comparing C.19.8 and C.19.7 [1998.131.175 & 176] was characteristic of the weather in this part of Tibet during August and this alone suggests the earlier date is more likely to be correct [MS 25/2/2005]

Other Information - Setting: The Mission Diary for 20th August, part 3 p.4, provides further information about the setting of this image: "It rained quite hard before and at dawn (about 4-45 am) and went on drizzling till 8am. // The 16 1/2 mile march was all the way along the shore of the Yamdrok Tso, a great lake forming three quarters of a circle some 45 miles long. ...// We had to delay our start [from Nang-Kar-tse camp] after our usual time, because the two Jongpens [local officials] of course had to go out to see us off a couple of miles from Nang-kar-tse, and we were told they would not be out of bed. We reached Pe-de-jong just in time, as a heavy rain and hail storm started. The mess tent was up and we took refuge. The camp field is covered with white gentian and tiny mauve asters. // There are many signs round this lake of a decrease of population, numerous ruins of houses and abandoned terraced fields and irrigation channels on the hill sides testify to this." [written by Philip Neame] [MS 25/2/2005]