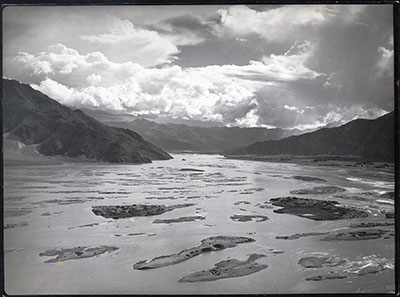 Looking up the Tsangpo river from Chushul, where the tributary of the Kyichu river joins the Tsangpo. The river is flooded and many mud banks are visible dotted along the river. Mountain sides can be see coming right down to the waters edge on the left and right in the middle distance and the sand banks created by the river can be seen rising up the sides of the hills. Mountains are visible in background. The cloud formations are quite distinctive in this image and are gathering together before the late afternoon or early evening rain storms that were typical at this time of year, although Chapman states that the rains were exceptionally heavy in 1936. Chapman took this image from the ruined fort just above the river at Singma Kangchung.

Notes on print/mount - A variety of crop marks and other instructions have been written on the back of the print in pencil. These include the instruction to cut 9/16" from the left hand side of the image, which would ensure that the large islands created by the flood in the lower part of the image are centred in the frame. There is also an instruction to 'Reduce to 5 5/8" ', which seems to have been used on prints to be reproduced in the official Mission photograph album. The caption 'Looking up the flooded Tsang-po from Chu-Shur' has been written in pencil. There are a some reference numbers including 'C/11/5', which relates to Chapman's numbering system for the images that were taken during the mission. There is also a further number '8' next to this, with the initials '(FSC)' below. 5a has been written in the top left hand corner [MS 14/01/2005]

Manual Catalogues - Caption in Chapman's hand-written list of negatives made whilst on the Mission to Lhasa, 1936-7 [See PRM Manuscripts Collection]: 'Ditto [From Chusul dzong and valley]'; PRM Manuscripts Collection: ‘List of Tibetan Prints and Negatives’ - Book 1, From Gangtok to the Natu La August 1936: ‘The flooded Tsang-po valley from ruined fort above Chu-shur’ [MS 12/03/2006]

Other Information - Description: In Lhasa the Holy City [London: Chatto & Windus, 1938; reprint, London: Readers Union Ltd., 1940, pp. 65-66] Chapman wrote a description of the setting of this image: "After lunch I climbed to the ruined dzong and had an impressive view of the Tsang-po in flood. The Kyi chu (meaning either 'river of happiness' or 'middle river'), the stream in which Lhasa stands, joins the Tsang-po at Chu-shur, and it too is flooded. Each of these rivers have innumerable channels which join and part again, leaving scrub-covered islands and sand-banks. The river beds are therefore about two miles wide. In the other direction lay the rich cultivation of the Chu-shur valley, with yellow-gold fields of mustard, dark-green pea fields, and the varying shades of ripening oats and barley. // The sun was setting in tattered storm clouds above the Tsang-po, and long shafts of light filled the valley with molten silver. // A busy time packing up film to be sent to India for processing" [MS 7/3/2005]

Other Information - Dates: The date 22nd August has been attributed to this image because the official Mission Diary records that it was on this date that the Mission caravan passed from the Tsang-po Valley to Chu-shur and Chapman describes this image quite vividly in his book [see notes in 'Description'] [MS 25/2/2005]

Other Information - Setting: Entry in Mission Diary for 21st August, part 3 p.5: "The Tsangpo valley looks extremely fertile with numerous terraced and irrigated branch valleys. Trees, crops, and hedges are flourishing. We can see from camp the turgid yellow brown flood of the Tsangpo and the place a mile away where we ferry across it in skin boats tomorrow. // Up stream are some giant snow peaks almost veiled in cloud. To the north across the river the hills rise sharply some 4,000 to 6,000 feet above the river so far as one can judge. No doubt in clear weather the snow range to the north would be visible. // There is a remarkable change in temperature here. One can sit in shirt sleeves in comfort - very different from the conditions fo the past fortnight on the high 14,000 to 15,000 feet plateau. // Singma Kang Chung is a very pleasant camp surrounded by willow and other trees. The local Tibetans have put up some marvellous decorated Tibetan tents for our following. // The usual rain storm came on from 5pm to 7pm" ['Lhasa Mission, 1936: Diary of Events', part 3 p.5, written by Philip Neame] [MS 25/2/2005]