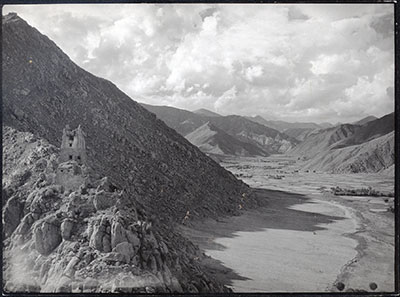 View of Nyang chu valley near Chushul, near Lhasa. This is the site of an ancient Royal Palace and many other ruins. A ruin can be seen on the left hand side of the image, with a steep hill descending into the valley. The Kyi Chu river is very low as this image was taken during August when the British Mission to Lhasa of 1936-37 was travelling into Tibet. Cultivated fields and small settlements can be seen in the distance.

Notes on print/mount - Many crop-markings have been hand-written in pencil on the back of the print. These include 'Reduce to 5 5/8" ' across the width of the image, and the instruction to cut 9/16" from the left hand side of the image. This coincides with the occurrence of some fogging in the print in the bottom left hand corner. Other instructions can be seen on the back of the print. The annotation "C/11/8" can be seen in the centre, which is part of the referencing system that Chapman used for photographs taken on the Mission to Lhasa in 1936-37. However, this image was referred to as 'C/11/5' in the Mission album and handlist of negatives used on the Mission. "5b" has been written in the top left hand corner [MS 13/01/2005]

Other Information - Setting: In Lhasa the Holy City [London: Chatto & Windus, 1938; reprint, London: Readers Union Ltd., 1940, p.65] Chapman wrote of the Chushul valley: "The banks of the river are too high here to allow of any irrigation, and only at the foot of streams coming from the hills are there villages, monasteries, and cultivation. The valley is dead flat and the mountains rise straight out of the plain as from the sea. The river has reduced miles of land to sandy wastes with occasional islands of willow scrub. The sand-storms must be terrible in winter" [MS 24/6/2005]

Other Information - Dates: A date of 22nd or 23rd August has been attributed to this photograph because it was on these dates that, according to the official Mission Diary compiled by Chapman in his role as Mission secretary, the Mission caravan passed into the valley [MS 25/2/2005]

Other Information - Agriculture: Small irrigation channels are visible when the image is magnified, from which water would be taken from the river to the fields. The Chushul valley was, and still is, the main grain producing area of central Tibet. [TS 13/01/2005]