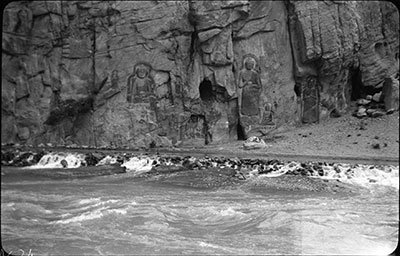 Figures of Buddha Shakyamuni carved onto a rock face at Saugang, between Gongkar and Lhasa. The Kyichu river can be seen in the foreground. There are two large Buddha figures carved on either side of the cave opening, with numerous smaller figures carved in the surrounding rock face. There is a large Buddha image on the left of the cave is in earth-touching gesture or mudra. The Buddha image on the left is in preaching mudra. This image was taken en route to Lhasa in 1936

In Negative - 'YN 24' has been scratched into the negative in the bottom left hand corner. The inscription 'YN' in the negative relates to Evan Yorke Nepean, who was part of the Mission to Lhasa in 1936-7 and who took many photographs alongside Chapman. For this reason the image has been re-attributed as having been taken by Nepean [MS 13/01/2005]

Other Information - Setting: The entry in Mission Diary for 11th August: "A quick and easy ride brought us to Saugang. The valley is still fairly open, but the bounding hills are higher leading up to permanent snow in places. For 2 or 3 miles we passed through a gorge known as 'Red Idol' Gorge from the numerous carved and coloured bas relief idols usually carved on large isolated rocks, with walls and lintel over to protect them from the weather. ... In considering the possibilities of aerodromes or landing grounds, none of which exist north of Kala, the possible use of the numerous large lakes on the Tibetan Plateau should be borne in mind, if sea planes with floats are available and able to climb to, land at, and take off at these altitudes. The Bam Tso, and the Kala Tso would appear to be quite suitable when not frozen over." ['Lhasa Mission, 1936: Diary of Events', part 2 p.4, written by Philip Neame][MS 7/3/2005]

Other Information - Description: Chapman refers briefly to these carved images in his publication Lhasa the Holy City [London: Chatto & Windus, 1938; reprint, London: Readers Union Ltd., 1940, p.47]: "Just above the village and bungalow [at Saugang] on the far side of the river many Buddhas have been carved and painted on the vertical walls of rock" [MS 7/3/2005]

Other Information - Location: These images are situated between Gongkar and Lhasa. Today there is a main road between Gongkar Airport and Lhasa which runs in front of the rock face. The path as seen in this image has been widened to permit the road to run close to the rock and the river bank has been moved accordingly. The images are brightly painted and this adornment is usually undertaken by devotees. [TS 13/01/2005]