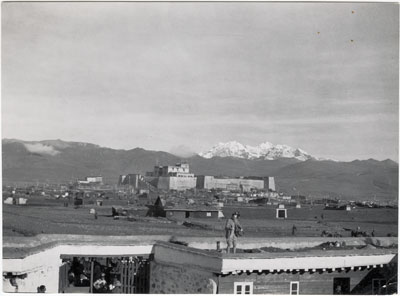 View over flat roof of Phari Dak Bungalow with Phari town and fort or dzong in distance. Evan Yorke Nepean can be seen on the roof of the bungalow in the foreground. Mountains in distance

Manual Catalogues - Caption in Chapman's hand-written handlist of negatives taken whilst on the Mission to Lhasa, 1936 [See PRM Manuscripts Collection]: 'Phari Dzong and hills'; PRM Manuscripts Collection: ‘List of Tibetan Prints and Negatives’ - Book 1, From Gangtok to the Natu La August 1936: ‘7/4 - View over flat roof of Phari dak bungalow and fort. The fort was ruined in the 1904 Younghusband mission to Lhasa’

Other Information - Related Images: Negatives prefixed with 'C.10.' form a group containing images of Lingmathang, Phari Dzong, Chomolhari from Tuna and chorten at Chushul. A note at the bottom of the page states that the contact prints for these images were all ‘in album’, ie: the draft album compiled during the mission from which official selection of images was made [MS 10/03/2006]