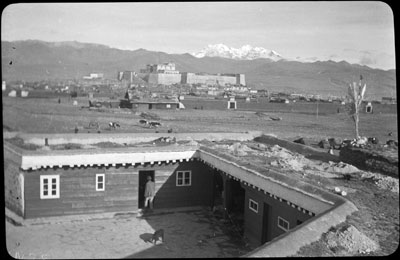 View of Phari and the Chomolhari range. Taken from the British Dak bungalow on the outskirts of the town

In Negative - 'YN.28' has been scratched into the negative in the bottom left hand corner, which helps to identify this image as having been taken by Evan Yorke Nepean [MS 10/03/2006]

Other Information - Setting: "The Phari bungalow is flat-roofed, as are all the buildings here, and faces onto a cobbled courtyard together with the Post Office and the rooms of the Postmaster, who is a Nepali, and the hut-keeper, who is a rather superior looking Tibetan with a long plait and a heavy gold ring in his left ear" ['Lhasa: The Holy City', F. Spencer Chapman, London: Chatto & Windus, 1938, p.33]