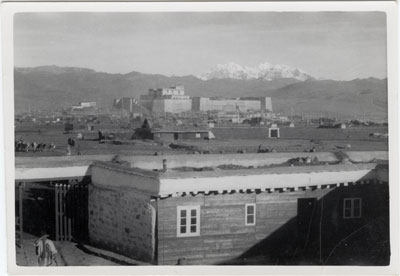 View of Phari showing the Dak bungalow, the Dzong or fort and mountains in the background. Some pack animals can be seen in the middle distance on the extreme left of the image

Manual Catalogues - Caption in Chapman's hand-written handlist of negatives taken whilst on the Mission to Lhasa, 1936 [See PRM Manuscripts Collection]: View over Phari Dak B[ungalow] and Dzong to hills [MS 10/03/2006]

Other Information - Related Images: 'CG' prefixes a group of negatives containing images of Phari, Chomolhari, Dr Tunyip, Phari Dzongpen, Tuna, telephoto panorama of Chomolhari. A hand-written note at the bottom of the list states ‘2 1/4 x 3 1/4 gone to album’ meaning that they were destined to be included in the draft album from which official selections of images of the Mission were to be made [MS 10/03/2006]

Other Information - Setting: "The Phari bungalow is flat-roofed, as are all the buildings here, and faces onto a cobbled courtyard together with the Post Office and the rooms of the Postmaster, who is a Nepali, and the hut-keeper, who is a rather superior looking Tibetan with a long plait and a heavy gold ring in his left ear" ['Lhasa: The Holy City', F. Spencer Chapman, London: Chatto & Windus, 1938, p.33]