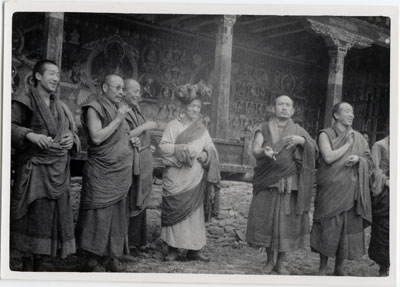 Painting of the Wheel of Life at Kargyu Monastery.

Notes on print/mount - 'CA.31' has been written on the back of the print in pencil, as has another number in the bottom elft hand corner ['135?] which is partially indecipherable. The caption 'The Wheel of Life Wall painting in Yatung Monastery' has also been written on the back. This is an error, although Chapman may have later referenced it in this way because of the close proximity of Kargyu to Yatung [MS 09/03/2006]

Other Information - Related Images: This image was included in the draft album prepared in Lhasa during the 1936 Mission, from which the official record of photographs was selected. It is one of a group of negatives containing images of the Residency, Gangtok and the Mission party preparing to go to Lhasa, the Maharanee of Sikkim, journey near Karponang, Changu Lake, Champithang and Chumbi Valley, Kargyu monastery and Yatung. At the top of the list is the comment ‘8, 9, 13, 17, 19, 20, 28, 31, 33, 36, 37 already enlarged 4x6. 3 copies’ [MS 09/03/2006]

Other Information - Setting: "[The Abbot of Kargyu] was extremely affable and gave us tea, cakes made with maize-meal, and russet apples grown in the valley below. The room was painted everywhere with vivid colours, and on the two walls were richly coloured religious paintings hanging in frames of silk brocade. One side of the room was filled with holy books and innumerable images of Buddha in gaily coloured pigeon-holes" ['Lhasa: The Holy City', F. Spencer Chapman, London: Chatto & Windus, 1938, p.26]