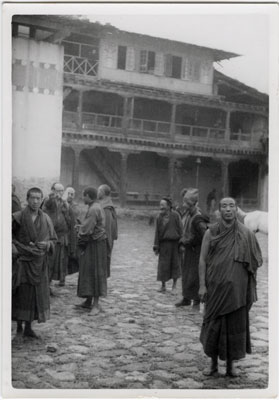 Notes on print/mount - 'CA.28 has been written on the back of the print in pencil. Another number has been written in the top left hand corner, but this has been cut in two and is partially indecipherable [MS 09/03/2006]

Manual Catalogues - Caption in Chapman's hand-written handlist of negatives taken whilst on the Mission to Lhasa, 1936 [See PRM Manuscripts Collection]: 'Group of monks at Kargyu Monastery'

Other Information - Related Images: This image was not selected for inclusion in the draft album compiled by the Mission whilst in Lhasa from which the official visual record was compiled, although the similar image 1998.131.133 was. This latter image shows the Abbot and monks smiling and displaying more animated gestures. It is one of a group of negatives containing images of the Residency at Gangtok and the Mission party preparing to go to Lhasa, the Maharanee of Sikkim, the journey near Karponang, Changu Lake, Champithang and Chumbi Valley, Kargyu monastery and Yatung. At the top of the list is the comment ‘8, 9, 13, 17, 19, 20, 28, 31, 33, 36, 37 already enlarged 4x6. 3 copies’ [MS 09/03/2006]