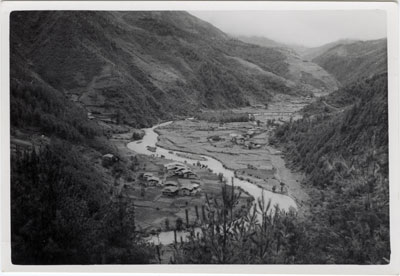 Looking down onto the Chumbi Valley between Champithang and Yatung

Notes on print/mount - 'CA.36' has been written on the back of the print in pencil, as has 'F. S. Chapman', apparently in Chapman's own hand. A further inscription of '135??' has been made in the bottom left hand corner, but this has been cut through and is thus partially indecipherable [MS 09/03/2006]

Manual Catalogues - Caption in Chapman's hand-written list of negatives made whilst on the Mission to Lhasa, 1936-7 [See PRM Manuscripts Collection]: 'View down onto Chumbi Valley'; PRM Manuscripts Collection: ‘List of Tibetan Prints and Negatives’ - Book 1, From Gangtok to the Natu La August 1936: 3/1 - Pipitang village below Yatung and winding Amo Chu. Jelep La goes over distant hills to Kalimpong’ [MS 08/04/2006]