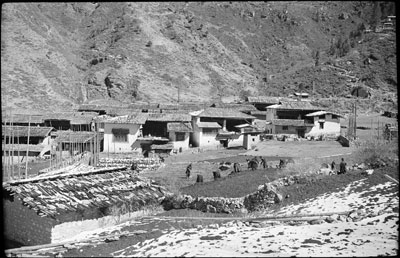 People working in the fields in Upper Yatung showing fields and houses surrounding them. Taken from a nearby hillside

Manual Catalogues - Caption in Chapman's hand-written list of negatives made whilst on the Mission to Lhasa, 1936-7 [See PRM Manuscripts Collection]: 'Workers in fields at upper Yatung' [MS 12/03/2006]

Other Information - Related Images: It seems that the images prefixed with 'G' were taken on the return route from Lhasa to Gangtok between late February and early March 1937. A group of negatives containing images of the route including Yatung, Gyantse, Kala and Red Idol Gorge [MS 12/03/2006]