The Tibetan Collections at The Pitt Rivers Museum, University of Oxford 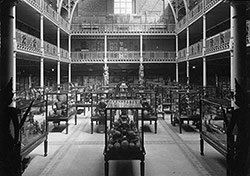 The Pitt Rivers Museum is one of the world's great museums of anthropology and archaeology in terms of the size, range and historical importance of its collections. With nearly half a million objects, it is the second largest museum of its kind in the United Kingdom containing material from all corners of the world and all periods of human history. The earliest acquisitions include objects collected in the seventeenth century (and which were part of the Tradescant founding collection of the Ashmolean Museum, the UK's oldest Museum) and the museum continues to collect new material.

The museum was established in 1884 when Lieutenant General A.H.L.F. Pitt Rivers donated 20,000 ethnographic and archaeological specimens to the University of Oxford for the purposes of research and education. Pitt Rivers stipulated that a lecturer should be appointed to work alongside his collection and the post was given to Edward B. Tylor, who thus became the first lecturer in anthropology in Britain. Housed in a purpose-built extension to the University Museum of Natural History, the Pitt Rivers collection rapidly increased in size under the leadership of its first curator Henry Balfour (in post 1891-1939) who personally donated more than 14,000 objects. Since many of these things were acquired at the height of British colonialism, the Pitt Rivers Museum and its extensive archive of documentation relating to the collections, provides an invaluable record of the collecting habits of anthropologists, archaeologists, missionaries, explorers, military officers and others from the mid nineteenth century onwards. It is particularly unusual in that its displays are arranged typologically (as Pitt Rivers intended) rather than according to the more familiar style of ethnographic museums in which material is organised by region or cultural categories. Access to the collections is also remarkable since around 40 per cent of the collections are on permanent display and the records for every object can be searched through the database: www.prm.ox.ac.uk/databases/. 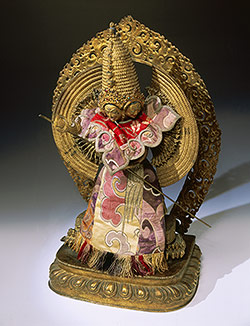 Within this enormous collection are around three thousand objects from Tibet or Tibetan-speaking regions of the Himalayas. A small but significant group of these arrived in Oxford with Pitt River's founding collection. Hence they were collected before 1884 and were likely to have been purchased on the London art market or from Pitt River's scholarly friends whose network extended throughout the British Empire. As is in keeping with the nature of an ethnographic museum, the majority of Tibetan objects in our collection are items of daily use hence amongst the objects donated by Pitt Rivers are a small bronze figure of Drolma , a tsa tsa depicting Palden Lhamo and several ritual implements some of which originated in Darjeeling, the favoured Himalayan retreat for members of the Raj. As noted by L.A. Waddell (in "Among the Himalayas"), this small town was renowned in the 1880s for its Tibetan curio sellers whose stock in trade appears to have been prayer wheels and thigh bone trumpets. The material apparatus of Tibetan Buddhism has since become a familiar feature of many Western museums and the Pitt Rivers gives us an early indication of how these things attained their ubiquity. 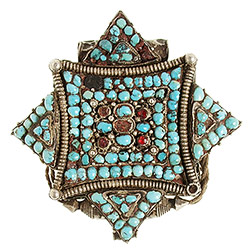 The Pitt Rivers Tibetan collection includes many items that may be less familiar to the researcher or visitor. Since Henry Balfour pursued his accessions according to type, Tibetan things fall under the wide range of categories used by this museum: arms and armour, textiles and dress, vessels of all kinds, traps, medical equipment, tools, coinage, writing equipment (including printing blocks) and masks. Perhaps the most remarkable assemblage of items comes from the Moravian Missionary Walter Asboe who was stationed in Tibetan speaking regions of the Western Himalayas during the 1930s and 40s. Asboe's close association with the region over such a substantial amount of time was coupled with an ethnographer's interest in the secular and domestic aspects of the lives of his field informants. His knowledge of these matters enabled him to become Himalayan correspondent for the journal of the Anthropological Institute in London in which he published accounts of the medical, agricultural and festival practices of the area. He amassed several hundred objects for Harry Beasley (one of the most important collectors of ethnographica in Britain) and his museum at Cranmore. On Beasley's death the contents of his museum were redistributed to several institutions including the Pitt Rivers where they form an important research tool as Asboe provided detailed documentation for many of these objects or published articles that refer to them. Asboe was also one of the few early twentieth century collectors who knew Tibetan and recorded his finds with local terms attached. 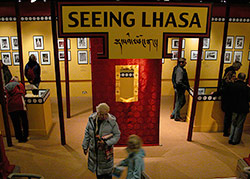 Along with some 3000 objects from Tibet and the Himalayas, the Pitt Rivers has one of the strongest collections of British photographs of Tibet in the United Kingdom totalling more than 4000 images. They are part of the museum's Photograph Collection, which contains approximately 125,000 images in total. The museum has collected photographs from its foundation and they have been treated as original and unique objects in their own right, with historical information being considered to reside not only in the image, but also in the way the photographs were presented and used. This has been an intentional policy rather than, as in so many collections, photographs being seen as an ephemeral accrual around an object collection. The Pitt Rivers Museum's collection of photographs from Tibet started to be acquired during the 1980s and many have been donated in recent years. These extraordinary photographs have been the stimulus for teaching, research, exhibitions (such as "Seeing Lhasa" in 2003) and publications. They have now provided the source material for the Tibet Visual History project and "The Tibet Album", making them accessible to web users all over the world. If you would like to examine the collections in person, please contact us via our website: www.prm.ox.ac.uk