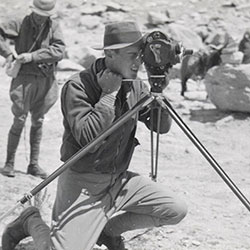 Frederick Spencer Chapman was born in London on 10 May 1907. His mother, Winifred Ormond, died shortly after his birth and his father, Frank Spencer Chapman, was killed at the battle of the Somme. Freddy (as he was to become known) and his older brother, Robert, were cared for by an elderly clergyman and his wife. Chapman developed an early interest in nature and the outdoors. As a boy he was, by his own account, 'first a mad-keen butterfly collector, then a wild-flower enthusiast, and at last a bird-watcher'. These were continuing interests throughout his school years and into his adult life.

Chapman was educated at Sedbergh School in Yorkshire and then won a Kitchener scholarship to St. John's College, Cambridge, to study history and English. It was there that he developed his passion for adventure and, by the end of his university years, had already completed several overseas excursions including a climbing expedition in the Alps and a journey to Iceland to study plant and bird life.

On leaving university Chapman spent several years in Greenland (1930-31 and 1932-33) as part of two expedition parties investigating possible air routes between Europe and America. Chapman undertook surveying work and was also hired as a ski expert and ornithologist. He had already shown a flair for photography and was told before departure to ''try and get really good at mountain photography if you have got a camera''. He also wrote the official accounts of the expeditions which were published as Northern Lights (1932) and Watkins' Last Expedition (1934) and produced a film called 'Northern Lights'. As he was a talented speaker, Chapman was soon giving lectures about his adventures in the Arctic and throughout the rest of his career he was often in demand in this capacity. His life and adventures provided him with ample material for lectures on exploration, photography, filmmaking and danger.

Chapman next turned his hand to teaching, accepting a post at Aysgarth Preparatory School in Yorkshire, where he found satisfaction in being able to pass his own love of nature and the outdoor life on to many of his pupils. However,his passion for adventure was far from sated and, early in 1936, he joined a Himalayan climbing expedition. It was during this trip that he first met Basil Gould, the Political Officer for Sikkim, Bhutan and Tibet who offered him a job as his private secretary for the 1936-37 Political Mission to Lhasa.

The Mission to the Tibetan capital departed from Gangtok (Sikkim) in late July 1936 and left Tibet just over six months later in February 1937. The aim of the Mission was to advise the Regent of Tibet and his Cabinet, to persuade the Panchen Lama to return from China where he had fled, and, if possible, to establish permanent British representation in Lhasa. The mission personnel, under the leadership of Gould, included Hugh Richardson, the British Trade Agent at Gyantse, and Lieutenant Evan Nepean, one of two telegraph operators sent from the Royal Signal Corps.

Chapman's main role in the Mission was to decipher telegraphs, but in reality he did much more than this. 'I have to take film and still photos, do bird, plant and bug work, some survey, and personal work for Gould''. He was also responsible for keeping the Mission Diary, which was accompanied by photographs and sent off to the Government of India each week. Chapman spent his spare time bird-watching (an interest shared with Richardson), hill-climbing, and taking and developing photographs. He was also a major exponent of the British Mission's entertainment programme. He spent many hours editing and sorting cine film (much of which he had made himself in Tibet) to show to Tibetan audiences at the British Mission house, the Dekyi Lingka. He was also one of the keenest players in the 'Mission Marmots' football team. It was due (in part) to these activities that the Mission made a favourable impression on the residents of Lhasa and in particular Chapman's 'open, cheerful friendliness went down well with the Tibetans'. After his return from Lhasa in 1937 Chapman secured permission to lead a small climbing expedition to the Tibetan holy mountain, Chomolhari. Chapman and a Sherpa named Passang Dawa succeeded in becoming the first mountaineers to reach the 24,000ft. summit. Tibet also provided Chapman with material for two new books ' Lhasa: The Holy City (1938) and Helvellyn to Himalaya (1940).

In 1938 Chapman returned to teaching, taking an appointment at Gordonstoun School in the north of Scotland. Unfortunately however, war was on the horizon and Chapman was soon called up for active service. He held a number of short-term posts before he was dispatched, in September 1941, to command a guerrilla warfare school in Singapore. From there Chapman was sent behind Japanese lines to organise reconnaissance and sabotage operations. He excelled in this role, spending three and a half years (1942-45) in the Malayan jungle. By the end of the war he was labelled a hero, promoted to Lieutenant-Colonel, and awarded a D.S.O. in 1944 and bar in 1946. His story of these years was published in his enormously successful 1948 book, The Jungle is Neutral . After World War II, Chapman married Faith Mary Townson and became the Director of the Outward Bound Trust. He then returned once again to teaching acting as headmaster of the British Forces' King Alfred School in Plön, West Germany (1948-52) and then at St. Andrew's College, Grahamstown, South Africa (1956-61), and later as warden for the Pestalozzi Children's Village for displaced children in Sedlescombe, Sussex (1962-66). In between he made time for another adventure caravanning from Cape Town to Uganda with his wife and three small boys in 1953. Lightest Africa , an account of this trip was published in 1955.

Chapman spent his last years working as the warden of Wantage Hall (a student hall of residence) at Reading University. However, as retirement approached, he felt under increasing pressure from health and financial worries. Also, despite leading such an extraordinary life, Chapman still felt unfulfilled. For someone who had always sought 'to experience the fullness of life, and the inner satisfaction that comes from facing and overcoming danger', old age offered few pleasures. Frederick Spencer Chapman shot himself on 8 August 1971.

Memoirs of a Mountaineer (combined reprint of Lhasa: The Holy City and Helvellyn to Himalaya ). London: The Reprint Society and Chatto & Windus, 1945.