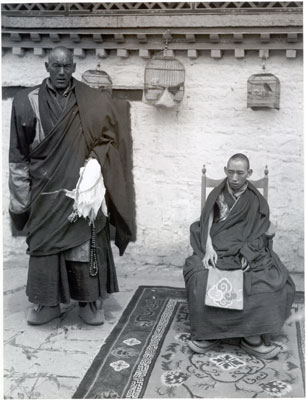 The Regent of Tibet, Reting Rinpoche, seated, with an attendant monk known by some of the British Mission party as 'Simple Simon' standing next to him. In garden of Regent's summer palace, Shide Drokhang. Bird cages behind.

Notes on print/mount - 'Rva-sgreng Regent with Sim-ga-pa' has been written beneath the image in the album in pencil, apparently not by Hugh Richardson [MS 10/06/2006]