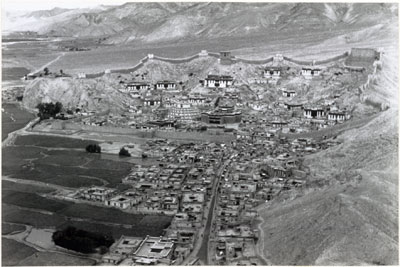 View of Gyantse showing Kumbum, the great chorten and the Palkor Chode Monastery, as seen from the dzong or fort. The whole length of the wall surrounding Gyantse can be seen in this image. The main routes into the town are clearly visible, as are the town boundaries and the cultivated fields on the right of the image. The view also gives a good idea of the town layout and the structure of domestic dwellings. The fields appear to be rich with vegetation as this photograph was taken before the harvest period

Manual Catalogues - Caption in Chapman's hand-written list of negatives made whilst on the Mission to Lhasa, 1936-7 [See PRM Manuscripts Collection]: 'Ditto [View from Dzong top] over Gyantse' [MS 13/03/2006]

Other Information - Related Images: Images prefixed with 'CJ.' seem all to have been taken in or around Gyantse during the time the Mission stayed there in mid-August 1936. They comprise a group of negatives containing images of Gyantse dzong, blue poppies, school, bazaar, Neame. A hand-written note at the end of the list states ’Prints 2 1/4 x 3 1/4 in album’, referring to the draft album of photographs from which the official selection of the mission was made [MS 13/03/2006]

Other Information - Setting: The photograph appears to have been taken from Gyantse dzong. Philip Neame describes in the official Mission Diary that he and Chapman visited the dzong on August 15th 1936, as does Chapman in his publication Lhasa The Holy City [London: Chatto & Windus, 1938; reprint, London: Readers Union Ltd., 1940, pp. 54-55]. Neame wrote: "Neame and Chapman went to the town [Gyantse] and Jong to take photos, and found many interesting subjects. ... The outer walls of the Jong have in many places crumbled away and the whole of it is in pretty bad repair except the chief temple, which is reputed to be 300 or 400 years old. The view from the top of the Jong perhaps 600 feet above the Gyantse plain is very striking. ... There were not enough ladders to go from one storey to the next, and near the top the ladders had to be hauled up behind Neame and Chapman and raised up to the next storey and vice versa upon descending". [MS 14/3/2005]