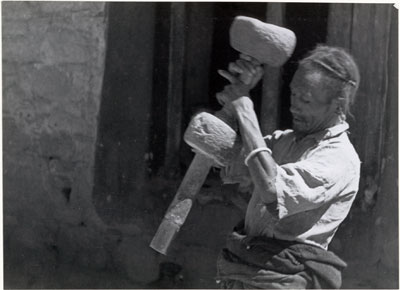 Man grinding corn with a large weight. This photograph was probably taken in the grounds of Bhondong Shappe's house

Other Information - Related Images: Images prefixed with 'CX' comprise a group of negatives containing images of Phendong and his house, grinding grain, officials (5th rank), Rupon, doctors, artists at work, official’s at Regent’s departure. They all seem to have been taken between October 2nd - 6th 1936 [MS 01/04/2006]