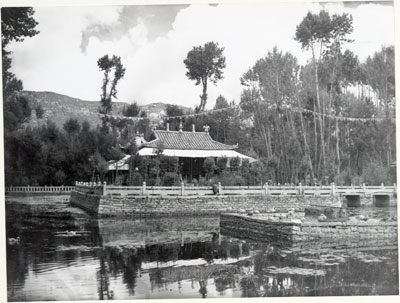 Lake pavilion at the Norbu Lingka. The stonework causeway leading to the building can be seen in the middle distance. Prayer flags can be seen suspended from trees to the rear of the pavilion

Notes on print/mount - 'In the Norbhu Lingka' has been written beneath the image in the album in pencil, apparently not by Hugh Richardson [MS 10/06/2006]