Yaks treading out barley outside Lhasa 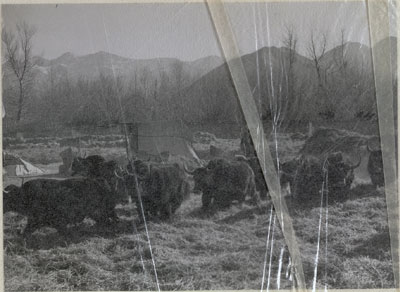 Yaks treading out barley in the last stage of the barley harvest, which removes the last grains from the stalks. This threshing place seems to have been close to the Regent's house. The threshing ground is communal and haystacks have been placed near the wall of the enclosure ready for use as winter fodder. Mountains can be seen in the background. There is a woman with a child on her back in the centre right of the image and a young boy can be seen standing on the far left. Tents can be seen in the centre and left hand side of the frame

Notes on print/mount - "29b" has been written in pencil in the top left hand corner on the back of the print. There are a large number of cropping and proofing marks on the back of the print and these include the instruction "Square up, cut 3/4" from side as indicated and reduce to 5 5/8" across". The cropping would remove the standing figure from the extreme left of the image. The number "C-15-4" has also been written in pencil across the centre of the image. This refers to the numbering system that Chapman used to record images taken on the Mission to Lhasa in 1936-37. There is also a small section of a sticky label that had been attached to the back of the print still visible, although it is not clear what this originally said [MS 17/1/2005]

Manual Catalogues - Caption in Chapman's hand-written list of negatives made whilst on the Mission to Lhasa, 1936-7 [See PRM Manuscripts Collection]: 'Ditto [threshing with yaks]. Yaks nearer a little under [exposed] and moved'; PRM Manuscripts Collection: ‘List of Tibetan Prints and Negatives’ - Book 4: ‘7/4 - Yaks threshing the barley outside Lhasa’ [MS 13/03/2006]

Other Information - Location: This image was probably taken close to the Regent's house as images C.15.2 and C.15.3 identify the location and the house can be seen in the background [MS 13/03/2006]

Other Information - Cultural Background: Typically barley would be harvested in central Tibet in the late Autumn. The wall in the background, in this case, would be the wall surrounding the Snake Temple on the north side of the Potala. Chapman wrote in his book Lhasa the Holy City [London: Chatto & Windus, 1938; reprint, London: Readers Union Ltd., 1940]: "The Ling-kor follows the wall of the Snake Temple and of the flooded reed-covered enclosure alongside. ... The Sacred Way now crosses some open barley-fields where they are gathering in the harvest and treading out the corn with the aid of a dozen or fifteen yaks, which they drive round and round over a floor of beaten clay. On one side is a pile of grain protected from evil spirits by a brightly coloured prayer-flag. Women are sifting the grain and sorting it by tossing it in basket-work trays, and storing it in striped brown and white yak-hair bags. It has been a good harvest. Luckily there were no hail-storms when the grain was ripening, nor any night frosts. An early drop in the temperature can lay waste acres of barley, though these frosts are unusual in the sheltered and comparatively low-lying vale of Lhasa. Now they are starting to plough up the fields with yaks and dzos harnessed in pairs. This must be finished before the ground is held by the winter frosts" [1940, p.165] [MS 12/3/2005]

Other Information - Cultural Background: This is the last stage in the process of harvesting barley. After threshing the crop the yaks walk repeatedly over the barley to ensure that all the grains are removed from the stalks. Afterwards the remaining stalks are used as fodder. [TS 20/1/2005]