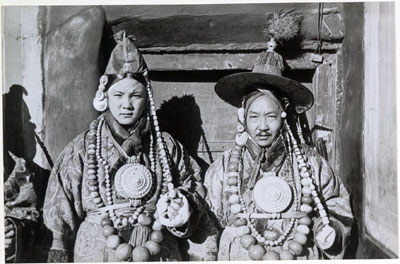 Two officials, Kyibu on the right, wearing ancient Tibetan dress known as ringyen for New Year celebrations in 1937. They are wearing silk robes with amber and coral necklaces and a circular gold and turquoise ornament. Kyibu's hat has a scarlet crown and is a sign that he is one of two officials chosen by the Regent for special duties during the ceremony. This dress is supposed to be that which was worn by the ancient kings of Tibet