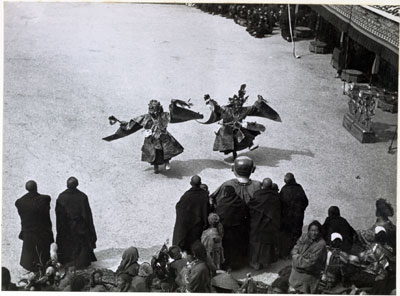 Two masked dancers at Tse Gutor. In the foreground is a monk as the Chinese priest Hashang, in heavily padded robes and bald-headed mask. On the right is a lacquered trumpet stand supporting two trumpets. Lay officials can be seen seated behind Hashang in the courtyardFour masked skeleton dancers, messengers of Shinje, in the Eastern Courtyard of the Potala during Tse Gutor. In the centre is an effigy of a human figure which the skeleton dancers have laid on the ground