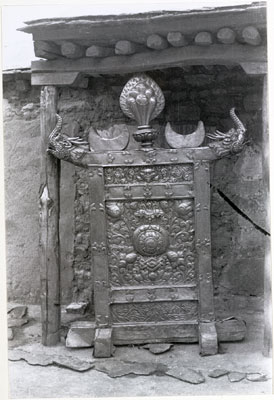 Ceremonial stand for a pair of radung or extendable ceremonial horns, front view. Flaming jewel decoration on top and makara heads on sides.

Other Information - Related Images: Images prefixed with 'CD.' seem to have been taken in October 1936, with this image datable to the period 18th October. 'CD.' prefixed images comprise a group of negatives containing images of Sera monastery, Gundeling, Potala, Chakpori, swans and hoopoe, shepherd with sling, Dekyi Lingka, stone lions outside Chinese legation, elephant passing the Potala. This image also bears a striking resemblance to 2001.35.98.1 in the Nepean collection in the PRM, the two photographs evidently having been taken at the same time with the photographers only inches apart [MS 20/1/2005]