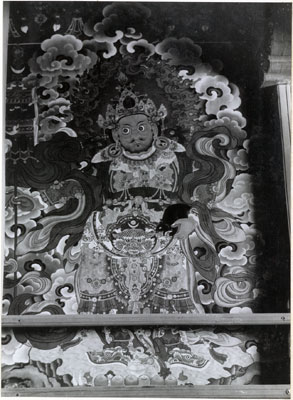 Wall fresco in the Norbu Lingka. Depicts Vaisraiana, Guardian of the North, one of the Buddhist Guardian Kings of the Four Quarters. He holds the banner of victory and a jewel-spitting mongoose.

Notes on print/mount - The print has a large number of crop and reproduction markings written on the back in pencil. These include the reference number 'C-20-15', which relates to the system that Chapman used for his images whilst on the British Mission to Lhasa in 1936-37. Other crop marks include the instruction to cut 21mm from the right hand side, which would remove the section of wall painting that just enters the frame of the image on the right hand side. There is also the instruction 'Cut as shown and reduce to 3 1/2" across. Fit to plate 31b as shown on enclosed layout', written in pencil and enclosed in an oval. The reference 31a has been written in the top left hand corner on the back [MS 28/4/2005]