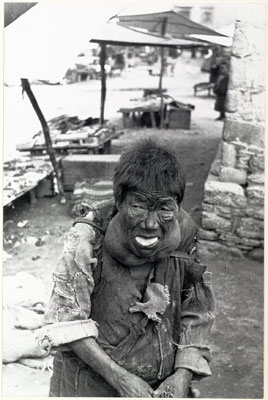 Notes on print/mount - Crop and other reproduction instructions have been written on the back of the print in pencil, including to reduce the image to 3" across after cropping. There are also a variety of reference numbers such as 'C-S-19', which relates to the numbering system Chapman adopted for images taken on the British Mission to Lhasa in 1936-37. Other reference numbers include '33C' in the top left hand corner and possibly a publishers reference number, 'C 43434/14' down the right hand side. A piece of tracing paper has been stuck to the back of the print and folded over the front. This would have been used for transferring cropping information from back to front and vice versa, however, it has not been used in this case [MS 2/4/2005]