Nomad sewing up bags of salt 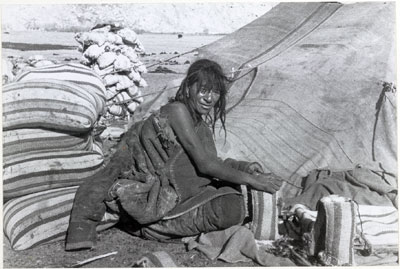 Nomad sewing up a bag of salt to be carried on the back of a pack animal. Wearing a sheepskin chuba or coat. Many woollen textile bags of goods can be seen loaded up in the background to the left. A yak's wool tent can also be seen on the right

Notes on print/mount - 'BJ 35' has been written on the back of the print in pencil. This relates to the numbering system for images that Chapman used on the British Mission to Lhasa in 1936-37 [MS 10/2/2005]

Contemporary Publication - Chapman used this image in the official Mission Diary for the 1936-37 Mission to Lhasa led by Sir Basil Gould to illustrate the entry for January 7th 1937. On this day Chapman rose early to go to the outskirts of Lhasa to photograph some of the nomad camps, which had come to Lhasa to pay taxes and participte in the New Year festivities. The text accompanying this image reads: "These nomads came down from the Chang Tang, the vast arid semi-desert away to the North of Lhasa. The journey took them fifty days. Hundreds of yaks carried wool, while each sheep was loaded with a bag of salt on each side of its back. This salt is deposited on the shores of the brackish lakes by the evaporation of the water. As barley cannot grow up there they exchange their wool and salt for tsamba (roasted barley meal) and other wares."