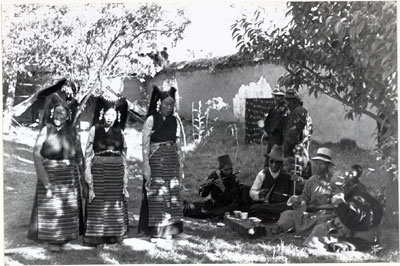 Three Tibetan women sometimes referred to as 'Chang Girls' by British Officials who would attend on guests at formal lunches and other occasions, standing alongside the well-known Lhasa Band who performed at the Dekyi Lingka on a number of occasions. On this day, the Mission was hosting a lunch for Tibetan officials of Cabinet rank

Other Information - Description: Mission Diary entry for September 28th 1936 - "We gave a lunch party to the officials of Cabinet rank. They were the three Shapes, Trimon shape (retired), Tsarong Dzasa, the Chikyap Khempo (head of all the monk officials) and the Yapshi Kung (a relation of a former Dalai Lama). Ringang also came as interpreter. // Before lunch Mr Gould met the Kashag for a brief but profitable business talk. // Our Tibetan guests are easy to entertain and appear to enjoy being entertained. There is never any hurry to break up the party. This one lasted until 5 p.m." ['Lhasa Mission, 1936: Diary of Events', Part VII p.1, written by Richardson] [MS 24/03/2006]