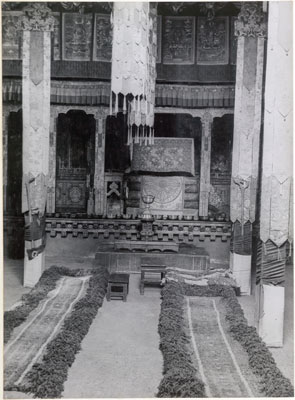 The Dalai Lama's throne in the reception room at the Norbhu Lingka. The monks would sit on the low cushions at the side if the Dalai Lama were teaching. Carpets can be seen in the floor and banners are suspended from the ceiling and are wrapped around pillars

Notes on print/mount - 'Dalai Lama's throne Norbhu Lingka' has been written beneath the image in the album in pencil, apparently not by Hugh Richardson [MS 10/06/2006]