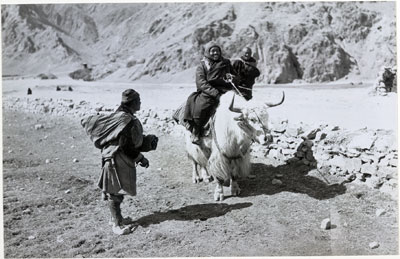 A Lama riding on a white yak surrounded by other people on foot. The man on the left appears to be carrying a child on his back. Suspended from his waist he appears to have a metal chain to which a large key is tied. There is one man behind the yak on the right and a fourth person in the background, out of focus, on the extreme right. The lama is riding along a path with a low stonework wall at the side