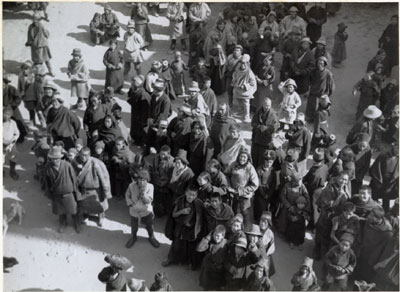 Crowd watching the Palden Lhamo procession. This photograph was probably taken from the Surkhang house as it was from that vantage point that Frederick Spencer Chapman, who took this image, watched and recorded proceedings

Manual Catalogues - Caption in Chapman's hand-written list of negatives made whilst on the Mission to Lhasa, 1936-7 [See PRM Manuscripts Collection]: 'Clear view down onto sparse crowd'; PRM Manuscripts Collection: ‘List of Tibetan Prints and Negatives’ - Book 3: ‘11/4 - Detail of the crowd [Pole Trick New year’] [NB: Incorrect - this was actually taken during the Palden Lhamo procession] [MS 25/08/2006]

Other Information - Related Images: Images prefixed with 'C.17' comprise a group of negatives containing images of Palden Lhamo procession down street, Kalon lama and Bhondong, Regent’s house and monastery. This group of images had been given the heading “‘Queen Vic’ Procession” by Chapman in his handlist. Queen Victoria was reputed to have been an incarnation of Palden Lhamo [see notes for C.17.7]. They seem to have been taken between November 26th - December 11th 1936 [MS 27/03/2006]